the day to day life of me, the bourgeois gal. this blog is a space for me to write about my daily life, including my vegan and vegetarian cooking, baking, and dining experiences, the research I do, the travel I embark upon, and other random things in this little thing we call life.

The Week in Pictures--January 3rd! 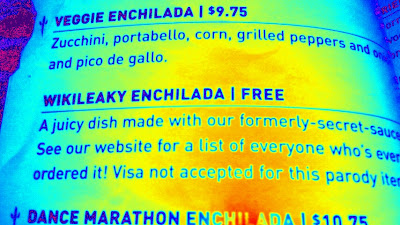 We spent the day Monday driving --the trek from Carbondale, IL to Pittsburgh, PA is one we've made many times, and sometimes we love it while others not so much. This time Dr.Vegan was sickly, so I drove the lengthy 11ish hours so that he could sleep a great deal. But, once we hit the Pittsburgh, PA hour, I made a decision: let's stop at Mad Mex for dinner..... I love, love, love the Mad Mex because they have lots of delicious vegan and vegetarian fare. But, I also love it because they have a fun menu. Check out this photo I took (with my cell phone) of one menu item (Wikileaky Enchilada). 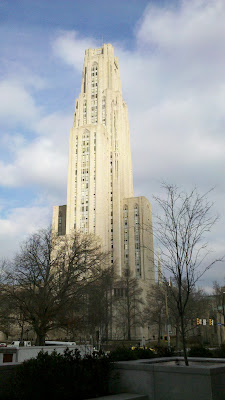 So, I forgot to take a picture on Tuesday---what can I say, I slept until 10:30 Tuesday morning...forgive me. I thought I might be able to make up my mishap by sharing the picture at left--the Cathedral of Learning. Dr.V and I were walking from a lunch spot (Sushi Boat) on Wednesday around 1pm toward the library, when it occurred to me that I had forgotten to snap a picture Tuesday. So, I stopped in my tracks, pulled out my camera phone and snapped this beauty. Dr.V's office is in the Cathedral, on the 11th floor, so when we're in Pittsburgh, we spend a lot of time here, writing and working. It only makes sense that I would share this picture with you. Of course, it's sort of wintery around here (around 30 degrees today), and there's no green life on the trees, but the beauty of this stark building is not lost in the weather.

For more information about this historic landmark on the University of Pittsburgh campus, google it or click here or here. And, please, if you're ever in the area, stop by to check out this building--the outside is beautiful, but so is the inside! 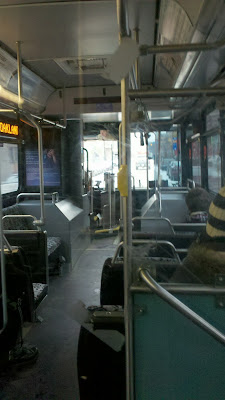 When in Pittsburgh, we ride the bus. Thursday, January 6th I took the bus from Dr.Vegan's place to the Cathedral of Learning. This is a shot from about the middle of the bus. This bus (the 93) is rarely full. It is a newer route that runs from Oakland (where the University of Pittsburgh is located) to the new Children's hospital (only a few short blocks walk from where Dr.V's apartment is). It is convenient, fast, and since it's lightly populated, more comfortable than the 54C bus which runs a similar (but longer and slower moving) route. I miss being able to take the bus. In Carbondale, I drive everywhere. When we lived in Pittsburgh together (perhaps I should drive by the old place and take a picture to share), we usually walked about 3-4 blocks to the nearest bus stop, then a block or two from the drop off to our respective offices. Though Pittsburgh weather can be chilly in the winter (doh!), riding the bus in the 'burgh was always reliable, semi-quick, and far better than having to fight traffic and pay for parking. And, one of the best parts is that the University provided a bus pass for employees and students--it was a great deal!

And, on this particular day, it was snowing, so riding the bus also means not having too think about the roads, which are always plowed and salted, but still snow covered!


Oh, since I skipped a day (Tuesday), I thought I'd share another picture of Pittsburgh. This picture was taken on January 6th also. I took it from the 11th floor (Dr.V's office window). I've been working in his office all week, co-opting a desk from one of the two folks with whom he shares an office. I adore being in the Cathedral. It's so beautiful, surreal, calming. The stairways are splendiferous. The elevators are slower than Santa's arrival.
And, the views....serene. Don't you agree? (see below)

Friday, the 7th, was sort of a strange day---we drove everywhere... Mr.Blueberry (Dr.V's new nickname) forgot his bank card at the Ethopian restaurant lastnight, so we had to drive there to get it. We went to the North Hills areas to the L.L.Bean store so that Mr.Blue could get a new winter coat. He has one, but it's quite bulky and it just looks uncomfortable on him. I'm kinda a "pusher" when it comes to him buying clothes--he often would do without if it weren't for a little extra push I think. Then we went to Tazza d'oro for a cup of joe and to read/work/write a bit (picture at right is our view from within the coffee shop). It was quite packed and loud in there, so we decided to head to the house. Now, usually, I am not a work at home kind of gal....well, not at his home...but I was willing to do it today given our circumstances. Mr.Blue got a text to meet a friend at Sharp Edge for a frosty beverage, and we just couldn't turn it down, so off we went, rather than working. I'm beginning to think I can't work a lick when Mr.Blueberry and I are hanging out....seriously! We came home briefly after having a few beverages, stopping only to pick up some vegan buffalo seitan wings (OMG, sooooo delicious) from Spak Brothers. Mr.Blue then headed to the scotch/cigar bar to hang with some friends. And, what about me, you ask....well, I stayed in, and it was perfect!

Saturday, January 8th....a fairly low key, boring day. How can I tell? Because I took a picture of the ceiling fan in Dr.Blueberry's apartment. 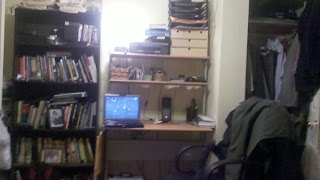 Sunday, the 9th, we watched football. Dr.Blue was disappointed. I was disappointed. Our friends who joined us at the restaurant/bar area were also disappointed (I think even the Pitt fans wanted the Chiefs to win today---something about a silly rivalry). That said, we didn't do much that allowed for picture taking today (I'm trying to avoid taking pictures in "bars" as it seems somewhat unprofessional for all involved). Instead, on this (my last) night in Pittsburgh until spring break (probably), I thought I'd share one picture of Dr.Blueberry's apartment (a.k.a. the tiny room). This view is from the the bed (almost literally, the foot of the bed would be at the bottom of this picture) to the desk, which for the record is the length of the room. To my left is his 6' kitchenette (including a dorm sized fridge, countertop stove, sink, and cabinetry), and to my right is about 3' between the bed and the wall/door to the outside. Seriously...this place is small! So, for those of you who've assumed I am exaggerating when I say his space is small---HA! the joke's on you!
Until next week!
Posted by bourgeois gal at 5:55 PM